ECE in the News 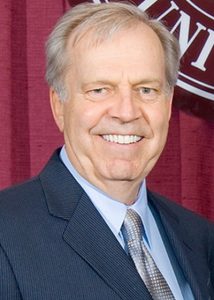 James “Jim” Worth Bagley, born in Kalamazoo, Michigan, called Mississippi, Texas, California, and Japan his home throughout his life. From humble beginnings, Bagley found success in the semiconductor industry throughout his career.

Graduating from Mississippi State University in 1966 with a Masters degree in engineering, Bagley began his career with Texas Instruments where he served as an engineer, manager, and executive. After 16 years with Texas Instruments, Bagley began to work for
Applied Materials, a small player in the semiconductor industry, where he eventually served as President and Chief Operating Officer. In 1996, Bagley left Applied Materials to become Chief Executive Officer and, later, Chairman of the Board of Lam Research, a competitor to Applied Materials. Under Bagley’s leadership, Lam Research also went from a modest company to a heavyweight competitor in the semiconductor industry. Equally as important to Bagley were his philanthropic contributions in pursuit of expanding opportunities for education through the J.W. Bagley Foundation, which he founded in 1994 and continues to provide financial assistance for all levels of education, medical research, and other charitable ends. The J.W. Bagley Foundation continues to consider Mississippi State a top priority and an example of the power of higher education. On a personal level, Bagley donated to Mississippi State’s engineering school to help students in his home state receive a world-class education. Initially hesitant to attach his name to the donation, Bagley and his family now find pride in the fact that the Bagley College of Engineering at Mississippi State University now carries on his legacy.

Bagley’s passion for education was felt most strongly when he spoke of Mississippi State University. From his financial contributions to the University to his involvement with the University’s “Car of the Future” initiative long after his retirement, Bagley was proud of his connections to Mississippi State and spent considerable time ensuring he could give back to his alma mater. 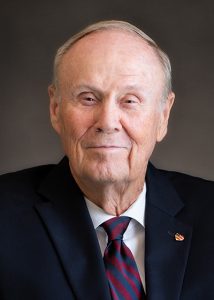 Ed Blakeslee is retired from Mississippi Power Company and lives in Gulfport, Mississippi.

After graduation from MSU in 1965 with a bachelor's degree in electrical engineering, Blakeslee reported to Fort Belvoir, Virginia for two years of active duty in the U. S. Army.  He was then assigned to the 169th Engineering Construction Battalion at Fort Steward, Georgia.  After completing his military responsibility, he went to work for Mississippi Power Company. Over a thirty-nine-year career, Blakeslee worked in various positions including engineer, comptroller, compliance officer, division director and retired as the vice president of power delivery and customer service.

Blakeslee says that the education and experiences gained as a result of attending MSU were the basis for much of his business success.  He received a quality education while an undergraduate student at MSU.  He made lifelong friends.  He met his wife who graduate from MSU with a degree in math.  The ROTC program at MSU gave him the opportunity to learn about leadership and responsibility as a platoon leader and company commander.  He and his wife have continued their support for MSU with the Ed and Marilyn Blakeslee/Mississippi Power Company Endowed Scholarship for engineering students.

Blakeslee is married to the former Marilyn Lois Moore of Starkville and they have two daughters and four granddaughters.  He is a member of Windance Country Club, the Kiwanis Club of Gulfport, and Trinity United Methodist Church. 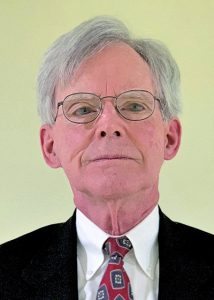 Drayton Boozer currently lives with his wife Beverly Beatty Boozer at the La Vida Llena Retirement Community in Albuquerque, NM. He retired as a technical manager from Sandia National Laboratories in 2002 having served the Nation in a variety of engineering roles during his 27 years of service.

Drayton excelled in science and mathematics during high school and became fascinated by space technology following the Sputnik satellite launch in 1957. He entered MSU as a cooperative education student, working at Redstone Arsenal, AL. After receiving his B.S. in Electrical Engineering in 1966 he accepted a NASA Traineeship that funded his graduate work at MSU.

He worked as a Ballistic Missile Defense systems analyst at Teledyne Brown Engineering, Huntsville, Al, after graduating with his Ph.D. in Electrical Engineering in 1970. After working at Waterways Experiment Station, Vicksburg, MS, he joined Sandia National Laboratories in Albuquerque, NM. He served in various roles at Sandia, but his most notable achievements were in terrain aided navigation system design and development. In recognition of his contributions to this field he served on the North Atlantic Treaty Organization (NATO) Advisory Group for Aerospace Research and Development (AGARD) Guidance and Control Panel.

Early engineering work experiences through the MSU cooperative education program and quality instruction from caring MSU professors were key factors that led to an exciting and successful engineering career.

Drayton and Beverly have been active members of Hoffmantown Church. Not having children of their own, they have mentored several young people to whom they are considered surrogate grandparents. During retirement Drayton has volunteered in the AARP Foundation Tax Aide program preparing income tax returns for low-income seniors. 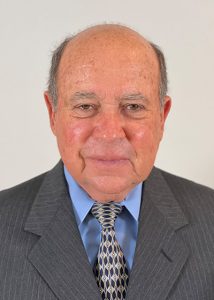 Jack Bradley spends his time between Gulfport, MS, Birmingham, AL, and Starkville, MS. He retired in 2008 after a distinguished career of accomplishments in the power industry at Georgia Power, Savannah Electric, and Mississippi Power.

In 2004 Bradley left Mississippi Power for the opportunity to manage the Savannah Electric Generation fleet as a general manager. In this role, he oversaw multiple facilities in the Savannah Electric territory prior to the merger with Georgia Power. He finished his career at Georgia Power in 2008, retiring to spend more time fishing at their Lay Lake home near Birmingham, golfing, and spending time with his grandchildren.

Bradley took a non-traditional role to completing college, but his time away with the Navy and later return to Mississippi State after starting a family helped him appreciate the value of his education, motivating him to encourage and aid students through scholarships to support future generations of Mississippi State engineers.

Bradley is married to Sylvia Gartman Bradley, and they have three children and five grandchildren. He is a lifetime member of Boy Scouts of America, Habitat for Humanity, and the United Methodist Church. He also enjoys watching as much Mississippi State baseball as possible. 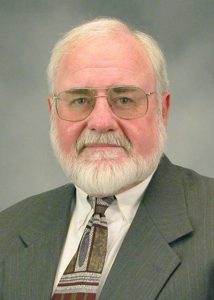 Dr John B. Noblin has been retired since 2012 and enjoys his time playing golf and tennis in Spring, Texas.

Dr. Noblin graduated from MSU in 1968 with his BSEE and joined IBM in Jackson, MS, as a Systems Engineer.  With an Educational Leave of Absence from IBM, he returned to MSU earning his MSEE in 1970 and his PhDEE in 1972.  He returned to IBM working primarily on process control computers in the fall of 1972.  In 1974 Dr. Noblin was transferred to Owego, NY, in support of IBM’s Federal Systems Division.

Dr. Noblin took the Weapons Integration Program to field testing at WSMR (White Sands Missile Range) in New Mexico.  He remained in New Mexico at the completion of this project becoming the Lead Systems Engineer for field testing.  Several weapons programs were tested there.

In 1987 Dr. Noblin joined the IBM team supporting the Space Station and Space Shuttle for NASA JSC (Johnson Space Center) in Houston, TX.  His team participated in getting the Shuttle back flying after the Challenger accident.  Onboard the Shuttle IBM was responsible for the flight software, display systems, memory systems, and flight computers. He was responsible for teams at Huntsville, AL, Cocoa Beach, FL, and Owego, NY, supporting different stages of mission development and space rated hardware production.

In 1994 Dr. Noblin was transferred to the UK (United Kingdom) supporting primarily the ASTOR Programme. This project was to develop a small jet for the UK MoD (Ministry of Defence) with a SAR/MTI radar sensor, ground stations, a data link and appropriate support software for imagery intelligence. He was in the UK for four years.  During this time Loral Defense Systems acquired IBM FSD and subsequently was acquired by Lockheed Martin.

Dr. Noblin moved to Goodyear, AZ, to become the Director of Systems Engineering for the Lockheed Martin site there. He spent the rest of his career in AZ in management until 2009 when he became a Chief Engineer and was named a LM Fellow. 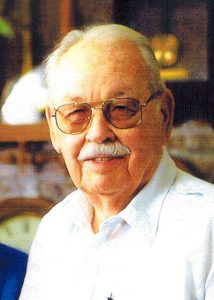 Charles Cullis Wade, renowned antique clock collector of Newton, Mississippi and Bogalusa, Louisiana, graduated from MSU in 1940 with a degree in Electrical Engineering.

Following graduation, Wade worked in cotton gins and built tung oil mills. He also was a Navy Seabee in World War II. He moved to Bogalusa in 1948 and built the Wade Tung Oil Mill. In 1955 he and his partner Randolph Cassidy formed C & W Construction Company and built the local airport and many cemeteries in Louisiana and Mississippi.

In 1967 Cullis married Gladys Valentine of Laurel, Mississippi, and they began to collect antique clocks. Both Wades worked on the clocks and enjoyed finding new and different clocks from all over the United States. The Cullis Wade Museum and Depot was built in 2006, and over 400 clocks were shipped from Bogalusa to Starkville. Wade loved going to the Clock Museum on Saturdays before the game and delighted in talking to young and old who would come through looking at the clocks...and taking a photo with "Bully Dawg!"

Cullis and Gladys enjoyed having 22 friends and family members in their sky box on game days. He continued to attend each game until his 94th birthday in July of 2012. After a brief illness, Wade missed the 2012 football season, and left us on October 15, 2012.

Larry Templeton, Athletic Director, delivered his eulogy and said," Cullis Wade was my friend. He put his money where his heart was, and helped make a better athletic program at MSU. I know this unversity's best days are yet to come because you cared. I am so thankful that our paths have crossed, no one can take this special relationship away! Goodbye to our Big Dawg." Templeton rang the cowbell loud and clear to signal his passing, and for others to step up, do their part, and give back to Mississippi State!