Over fifty teams from the department’s Introduction to ECE Design for first-year students and the ECE Capstone Design for seniors presented their final projects. Students in these courses use their skills to incorporate appropriate engineering standards as part of their work, and they fabricated their designs, tested their projects, and were evaluated on the design and demonstration of a fully functional project. 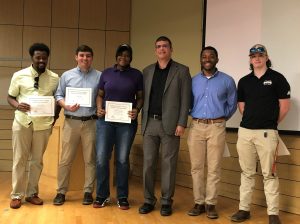 The first-place team and winner of the Ed Blakeslee Senior Capstone Design Award was Joy Ride. Joy Ride is a toy vehicle that allows all children, including those with disabilities, to drive with the use of intuitive controls and various safety features. Team members include Shania Drummond, Jerrick Dubose, Cody Hudson, Ryan Meadows, and Dillon Woods, and the team’s project advisor was ECE Associate Professor Dr. Seungdeog Choi. 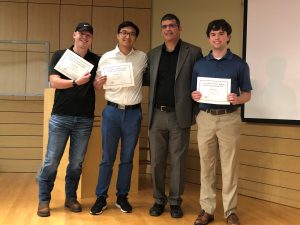 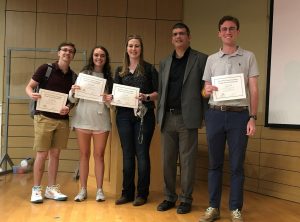 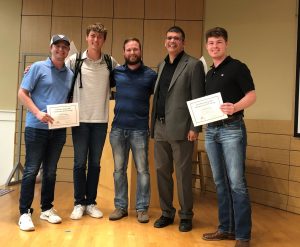 The first-place team for Introduction to ECE Design was SmartCane, which is a cane that can detect obstacles from chest to eye level. Team members Garrett Bradshaw, Slade Hicks, Garrett Mclaurin, and Brandon Waldrup were assisted by senior electrical engineering major Jonathan Cheeks as their mentor. 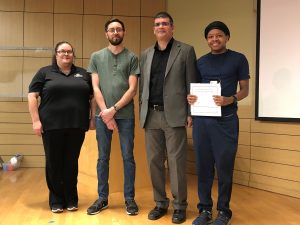 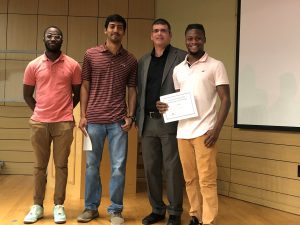 The capstone projects are completed in the department’s senior design class, a course taken by students who have completed all other coursework in ECE. Faculty advisors assist students in projects. The first-year students in the Introduction to ECE Design receive assistance from the ECE peer mentors.

The Department of Electrical and Computer Engineering at Mississippi State University consists of 27 faculty members (including 6 endowed professors), 7 professional staff, and over 700 undergraduate and graduate students with approximately 100 being at the Ph.D. level. With research expenditure of the department in excess of $11.94 million, the department houses the largest High Voltage Laboratory among North American universities. For more detailed information on the department, please visit our website www.ece.msstate.edu.